I've noticed that builds are broken and tests fail a lot more often on open source projects than on “work” projects. I wasn't sure how much of that was my perception vs. reality, so I grabbed the Travis CI data for a few popular categories on GitHub1. 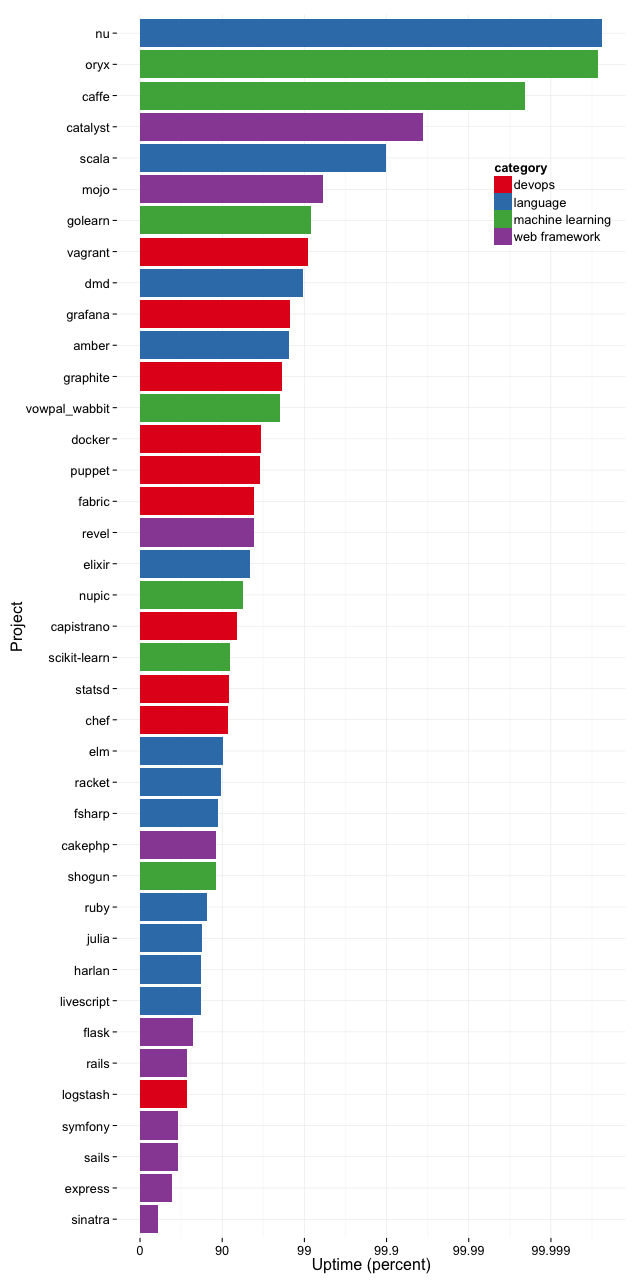 For reference, at every place I've worked, two 9s of reliability (99% uptime) on the build would be considered bad. That would mean that the build is failing for over three and a half days a year, or seven hours per month. Even three 9s (99.9% uptime) is about forty-five minutes of downtime a month. That's kinda ok if there isn't a hard system in place to prevent people from checking in bad code, but it's quite bad for a place that's serious about having working builds.

By contrast, 2 9s of reliability is way above average for the projects I pulled data for2 -- only 8 of 40 projects are that reliable. Almost twice as many projects -- 15 of 40 -- don't even achieve one 9 of uptime. And my sample is heavily biased towards reliable projects. There are projects that were well-known enough to be “featured” in a hand curated list by GitHub. That's already biases the data right there. And then I only grabbed data from the projects that care enough about testing to set up TravisCI3, which introduces an even stronger bias.

To make sure I wasn't grabbing bad samples, I removed any initial set of failing tests (there are often a lot of fails as people try to set up Travis and have it misconfigured) and projects that that use another system for tracking builds that only have Travis as an afterthought (like Rust)4.

Why doesn't the build fail all the time at work? Engineers don't like waiting for someone else to unbreak the build and managers can do the back of the envelope calculation which says that N idle engineers * X hours of build breakage = $Y of wasted money.

But that same logic applies to open source projects! Instead of wasting dollars, contributor's time is wasted.

I used to dig through these kinds of failures to find the bug, usually assuming that it must be some configuration issue specific to my machine. But having spent years debugging failures I run into with make check on a clean build, I've found that it's often just that someone checked in bad code. Nowadays, if I'm thinking about contributing to a project or trying to fix a bug and the build doesn't work, I move on to another project.

The worst thing about regular build failures is that they're easy5 to prevent. Graydon Hoare literally calls keeping a clean build the “not rocket science rule”, and wrote an open source tool (bors) anyone can use to do not-rocket-science. And yet, most open source projects still suffer through broken and failed builds, along with the associated cost of lost developer time and lost developer “conversions”.

Please don't read too much into the individual data in the graph. I find it interesting that DevOps projects tend to be more reliable than languages, which tend to be more reliable than web frameworks, and that ML projects are all over the place (but are mostly reliable). But when it comes to individual projects, all sorts of stuff can cause a project to have bad numbers.

Also, props to Michael Smith of Puppetlabs for a friendly ping and working through the build data for puppet to make sure there wasn't a bug in my scripts. This is one of my most maligned blog posts because no one wants to believe the build for their project is broken more often than the build for other projects. But even though it only takes about a minute to pull down the data for a project and sanity check it using the links in this post, only one person actually looked through the data with me, while a bunch of people told me how it must quite obviously be incorrect without ever checking the data.

This isn't to say that I don't have any bugs. This is a quick hack that probably has bugs and I'm always happy to get bugreports! But some non-bugs that have been repeatedly reported are getting data from all branches instead of the main branch, getting data for all PRs and not just code that's actually checked in to the main branch, and using number of failed builds instead of the amount of time that the build is down. I'm pretty sure that you can check that any of those claims are false in about the same amount of time that it takes to make the claim, but that doesn't stop people from making the claim.