Last week, Quartz published an article titled “There is no gender gap in tech salaries”. That resulted in linkbait copycat posts all over the internet, from obscure livejournals to Smithsonian.com. The claims are awfully strong, considering that the main study cited only looked at people who graduated with a B.S. exactly one year ago, not to mention the fact that the study makes literally the opposite claim.

Let's look at the evidence from the AAUW study that all these posts cite. 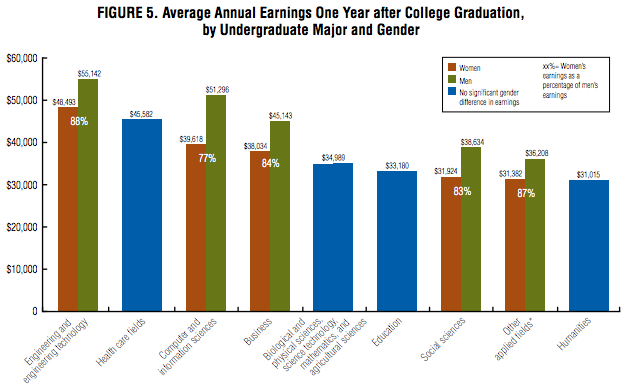 The study controls for a number of factors to try to find the source of the pay gap. It finds that after controlling for self-reported hours worked, type of employment, and quality of school, “over one-third of the pay gap cannot be explained by any of these factors and appears to be attributable to gender alone”. One-third is not zero, nor is one-third of 12% or 23%. If that sounds small, consider an average raise in the post-2008 economy and how many years of experience that one-third of 23% turns into.

The Quartz article claims that, since the entire gap can be explained by some variables, the gap is by choice. In fact, the study explicitly calls out that view as being false, citing Stender v. Lucky Stores and a related study1, saying that “The case illustrates how discrimination can play a role in the explained portion of the pay gap when employers mistakenly assume that female employees prefer lower-paid positions traditionally held by women and --intentionally or not--place men and women into different jobs, ensuring higher pay for men and lower pay for women”. Women do not, in fact, just want lower paying jobs; this is, once again, diametrically opposed to the claims in the Quartz article.

Note that the study selectively controls for factors that reduce the pay gap, but not for factors that increase it. For instance, the study notes that “Women earn higher grades in college, on average, than men do, so academic achievement does not help us understand the gender pay gap”. Adjusting for grades would increase the pay gap; adjusting for all possible confounding factors, not only the factors that reduce the gap, would only make the adjusted pay gap larger.

The AAUW study isn't the only evidence the Quartz post cites. To support the conclusion that “Despite strong evidence suggesting gender pay equality, there is still a general perception that women earn less than men do”, the Quartz author cites three additional pieces of evidence. First, the BLS figure that, “when measured hourly, not annually, the pay gap between men and women is 14% not 23%”; 14% is not 0%. Second, a BLS report that indicates that men make more than women, cherry picking a single figure where women do better than men (“women who work between 30 and 39 hours a week … see table 4”); this claim is incorrect2. Third, a study from the 80s which is directly contradicted by the AAUW report from 2012; the older study indicates that cohort effects are responsible for the gender gap, but the AAUW report shows a gender gap despite studying only a single cohort.

The Smithsonian Mag published a correction in response to criticism about their article, but most of the mis-informed articles remain uncorrected.

It's clear that the author of the Quartz piece had an agenda in mind, picked out evidence that supported that agenda, and wrote a blog post. A number of bloggers picked up the post and used its thesis as link bait to drive hits to their sites, without reading any of the cited evidence. If this is how “digitally native news” works, I'm opting out.

If you liked reading this, you might also enjoy this post on the interaction of markets with discrimination, and this post, which has a very partial explanation of why so many people drop out of science and engineering.

Update: A correction! I avoided explicitly linking to the author of the original article, because I find the sort of twitter insults and witch hunts that often pop up to be unconstructive, and this is really about what's right and not who's right. The author obviously disagrees because I saw no end of insults until I blocked the author.

Charlie Clarke was kind enough to wade through the invective and decode the author's one specific claim that about my illiteracy was that footnote 3 was not rounded from 110.3 to 111. It turns out that instead of rounding from 110.3 to 111, the author of the article cited the wrong source entirely and the other source just happened to have a number that was similar to 111.